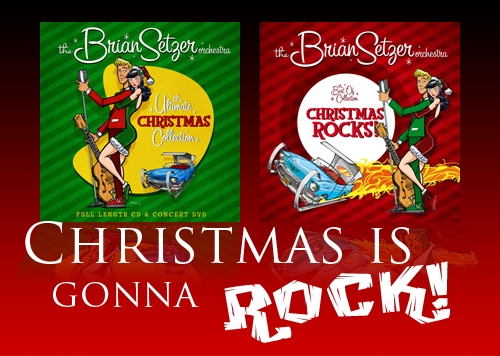 Surfdog Records presents the Ultimate Brian Setzer Orchestra Holiday package. We’ve combined the brand new Best Of collection (featuring the previously unreleased "Santa Claus Is Coming To Town", AND the full length BSO Christmas Extravaganza!  holiday concert DVD filmed in December 2004 at L.A.s sold out Universal Amphitheatre. It’s a full 1 hour 40 minute show, with added backstage footage and behind the scenes work with Brian and crew. This is the same concert film that was broadcast on PBS stations during the 2006 fundraising drive (in an edited form).
AVAILABLE NOW!

CHRISTMAS ROCKS! THE BEST OF COLLECTION

The Brian Setzer Orchestra has established a new standard by which holiday albums are judged. They struck a major chord with audiences everywhere and catapulted the super-charged 18 piece Big Band into a Christmas franchise via their annual sold out holiday tour.
Surfdog Records is proud to announce the release of Christmas Rocks: The Best Of Collection, an amazing combination of the very best tracks from the two holiday releases, paired with the previously unreleased "Santa Claus Is Coming To Town", PLUS two seasonal selections from his 2007 masterpiece Wolfgang’s Big Night Out.
AVAILABLE NOW!