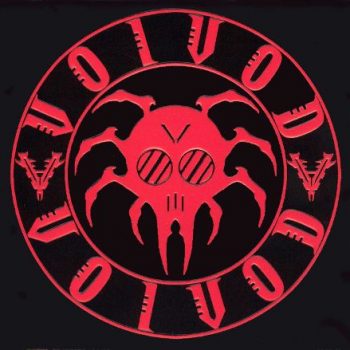 The only predictable thing about Canadian cosmic-metal warriors Voivod is that they will forever be unpredictable. On the warpath for more than 35 years, Voivod have pushed their sound relentlessly forward, constructing imaginative musical realms with each endeavor. They literally changed the face of thrash metal in the ‘80s, forged new prog-metal ground in the ‘90s, and kept up with changing times and lineups in the 2000s with fresh, inspired music.

In 2018, Voivod’s 14th studio album, The Wake, is upon us. The band’s original members, drummer Michel “Away” Langevin and vocalist Denis “Snake” Belanger, find themselves reinvigorated and reenergized by the presence of guitarist Daniel “Chewy” Mongrain and new bassist Dominic “Rocky” Laroche. Mongrain, now celebrating ten years in the band, has done a more than respectable job replacing original guitarist, the ever-beloved Denis “Piggy” D’Amour. His contribution to the making of The Wake was as integral to the new album as was Piggy’s leadership during his reign.

The Wake steers the Voivod spacecraft through a tangled, tantalizing storyline, woven into the most maze-like, edge-of-your-seat musical experience the band have embarked upon since those heady days of the late ‘80s. Songs such as “The End of Dormancy,” “Iconspiracy” and “Spherical Perspective” churn and twist in such a way that no Voivod devotee could possibly have wished for more. While previous album Target Earth was a grand rebirth for the band, and 2016’s Post Society EP a promise of adventurous things to come, The Wake takes the approach of those recordings, widens the parameters, and introduces a few bold new facets to the Voivod soundscape: prominent acoustic guitars and classic music flourishes are woven into the controlled electric calamity. The Wake is sure to be hailed alongside previous achievements Dimension Hatröss, Nothingface and The Outer Limits.

Chewy offers insight into the collaborative nature of Voivod song architecture: “I wrote a lot of the ideas and worked a lot on the details, but the song structures and general sound and identity of the opus is a team work. Snake recorded a few ideas on the bass and with his voice, which inspired me to create something with. Rocky wrote most of his bass parts and also song ideas, parts, and melodies. Away’s talent at structuring song sections is gold, and his groove on the riffs takes the ideas into a parallel world of which no one could imagine at the start.” He might very well be thinking of the 15/4 time signature driven by Away’s propulsive skin-beating on “Always Moving.”

As for those new facets of the Voivod sound within The Wake, Chewy reveals that “the acoustic guitars were added as texture on the clean parts, but also over some distorted riffs. It helps hearing the colors of the chords more precisely, and we mixed it just loud enough to feel them. As for the string quartet, when I was listening to the outro of ‘Sonic Mycelium,’ I was hearing strings in my head, so I got to work and wrote a three-minute arrangement for string quartet. The quartet was fun to work with, and since we had them in the studio, we added a few sparkles on other songs. There is a part in ‘Always Moving’ which is inspired by Stravinsky. Classical, jazz, metal, they use the same 12 notes, so why not borrow some ingredients from other styles? It’s refreshing.”

The journey of the album is deepened by a compelling storyline, which Snake summarizes this way: “In the wake of an incredible discovery that created a monstrous disaster, the whole world will live through a series of events that will force humanity to understand the new reality and the concept of not being alone in the universe. Not without a fight, not without chaos and conflicts, not without plots and conspiracy. Some will accept and some will deny the truth. Religions will fall to create new ones. But eventually, the world will reach a new level of conciousness, a new spirit, a new way to look at the sky.“

It’s all revisited and resolved in the 12-minute closing song, “Sonic Mycelium,” which also quotes from 1993’s “Jack Luminous” epic. “That song is a sort of medley,” says Snake, “of all the other songs on the album. It mixes riffs and musical parts, but in a different order.”

Of course, no Voivod album is complete without the inimitable artwork provided by drummer Away, who notes that the cover “depicts us, the band, as four Voivods holding a vigil for a dead planet.” Hence The Wake, an incredibly captivating slice of sonic escape from the masters of cosmic metal, and an album that sits confidently next to the many top-tier achievements of their past. Forever forward, always moving!!!