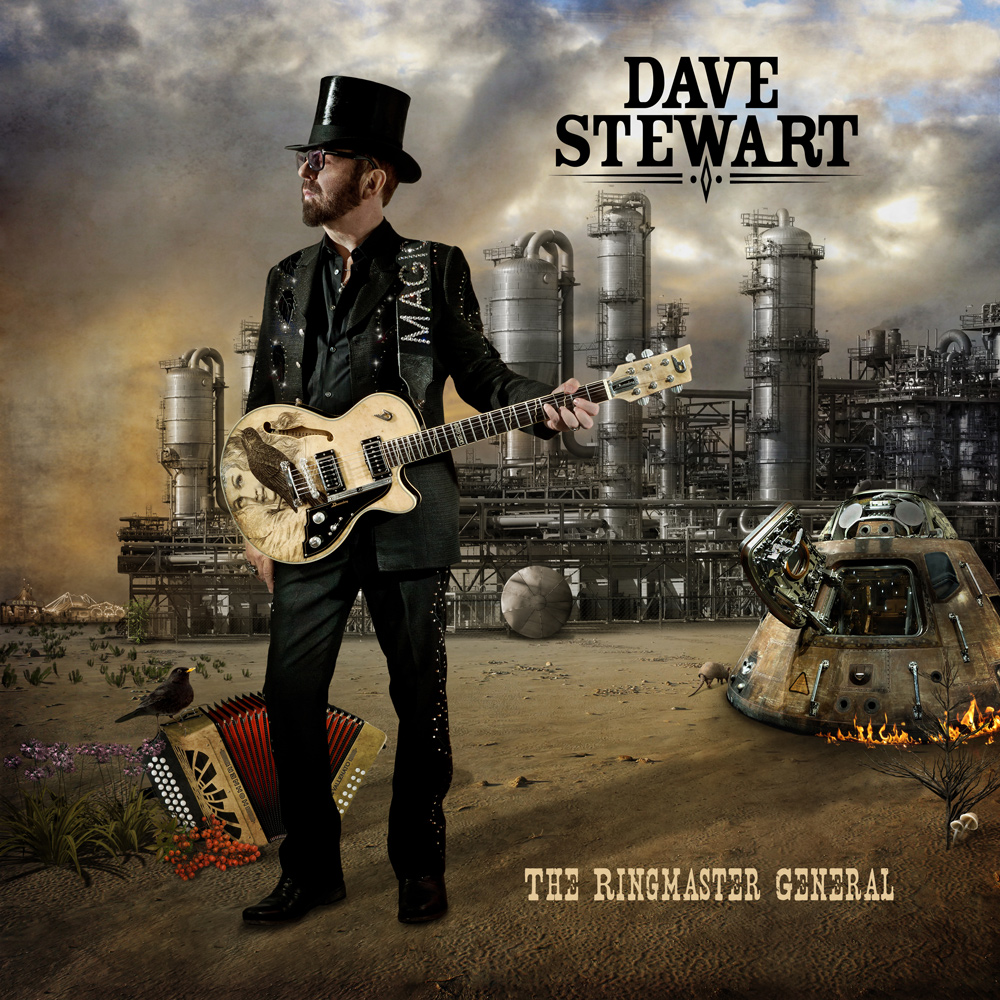 DAVE STEWART will play a special “Dave Stewart and Friends” show, Thursday, October 25 at The Mercy Lounge in Nashville, TN. This performance marks the British singer, songwriter and guitarist’s first local show since the release of his new album THE RINGMASTER GENERAL, recorded at Nashville’s Blackbird Studio. For this performance, STEWART will be joined by such friends as Tom Bukovac and Jessie Baylin along with other special unannounced guests. Tickets are on sale now.

DAVE STEWART comes to Nashville after playing a sold-out “Dave Stewart and Friends” show at The Troubadour in Los Angeles on September 28.In Los Angeles, STEWART was joined by guests John Mayer, Orianthi, Colbie Caillat, Delta Goodrem, Vanessa Amorosi and Amy Keys. Following the show at The Mercy Lounge, STEWART will be playing the VOODOO MUSIC + ARTS EXPERIENCE in New Orleans on Saturday, October 27.

THE RINGMASTER GENERAL (Weapons of Mass Entertainment/Surfdog) is a potent and distinctive musical gumbo with rock, blues, country, rhythm & blues and psychedelia. It was recorded and mixed by John McBride at the famed studio he owns with Martina McBride, Blackbird Studio. It features 13 new songs–including striking duets with Alison Krauss, Diane Birch and Joss Stone–as well as one sung with and co-written by Jessie Baylin. The blistering guitar skills of Orianthi are featured as well. As with his 2011 album, The Blackbird Diaries, STEWART is backed by some of the finest musicians in Nashville including: guitarist Tom Bukovac, drummer Chad Cromwell, bassist Michael Rhodes, steel guitarist Dan Dugmore and Mike Rojas on piano.

Meanwhile, it was a star-studded affair August 22 in Nashville at the Belcourt Theatre for the premiere of DAVE STEWART’s documentary film THE RINGMASTER GENERAL. With the legendary British singer, songwriter and guitarist on hand himself with wife Anoushka, the event drew celebrities, Music Row executive royalty, friends and family including those who appear in the film and on the albums: Martina and John McBride, Vince Gill, Nathan Followill of Kings of Leon, Nash Overstreet of Hot Chelle Rae, guitarist Orianthi, Travis McNab from the Sugarland band, and singer songwritersJesse Baylin and Karen Elson. Musicians and backing singers who appear on the albums also attended the celebration which continued on late into the evening at hot spot Cabana: Anne Marie Calhoun, Tom Bukovac, Mike Rajas, Chad Cromwell, Dan Dugmore, Wendy Moten and Drea Rhenee.

Here’s some early critical praise for THE RINGMASTER GENERAL:

“…a terrific songwriter, guitarist and producer and surrounds himself with great players and vocalists such as Alison Krauss, Joss Stone, Jessie Baylin and Diane Birch. Stewart reveals just enough of the love-perplexed man behind the curtain to keep us entranced.”
–Jerry Shriver, USA TODAY, September 4, 2012
“A love letter to American roots music, it is steeped in blues, folk and country…”
–AdrianThrills, DAILY MAIL (U.K.), August 9, 2012
“Both albums fuse country, rock, blues, bluegrass and R&B, and the results are quirky, soul-stirring and thoroughly engrossing.”
–Joe Bosso, MUSICRADAR.COM, August 13, 2012
“…a record bursting with passion, personality and variety…. Dave Stewart, both ringmaster and general, takes a powerful bow.”
– MXDWN.COM, September 10th, 2012

About DAVE STEWART:
“An explosive musician, deft guitar player, innately recognizes the genius in other people and puts it into play without being manipulative.” – Bob Dylan
“Jack of All Trades Master of All of Them” –The Sunday Times
“He’s the musician’s musician.” –Rolling Stone
For a full bio on STEWART, click herehttp://weaponsofme.com/employee/19/