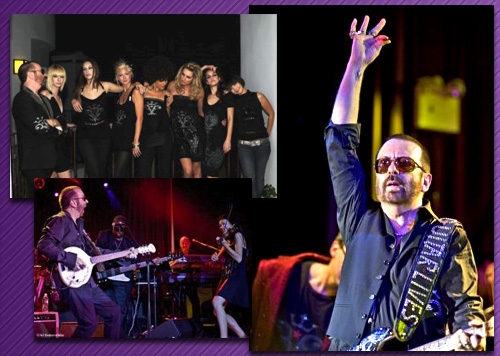 … another working day for Mr Stewart…

Sold-Out Show Featured Girls, Guitars and Thunderous Motorcycle Calvary
LOS ANGELES, CA SEPTEMBER 25, 2008 – A sold-out audience at Los Angeles’ legendary concert venue The Roxy was treated to a one-of-a-kind rocking spectacle last night, as Icon Dave Stewart took the stage by storm with blazing guitar solos, powerful vocals, and a 30 piece orchestra, making the Rock Fabulous Orchestra, the largest band the venue has ever seen. The set featured many songs from Stewart’s vast catalog of hits from the Eurythmics as well as timeless tracks penned by Stewart including Tom Petty’s “Don’t Come Around Here No More,” No Doubt’s “Underneath It All,” Mick Jagger’s Golden Globe-winning “Old Habits Die Hard” and Celine Dion’s recent chart-topper “Taking Chances,” to name a few.

Offered The Roxy’s Megan Jacobs, "There is no other way to describe last night’s show…it was truly ROCK FABULOUS!! I was so honored to have the legendary Dave Stewart on our stage playing all of his hits.  The 30 piece orchestra and the 5′ x 5′ pictures made the night much more than just another rock show but a true Hollywood event.  In fact, Dave Stewart’s 30 piece Rock Fabulous Orchestra was one of the hottest shows I’ve ever seen at the Roxy and definitely the hottest event in Los Angeles last night.  Thanks for helping keep The Roxy legendary."

The audience which included the likes of Jimmy Iovine, Andy Garcia, Billy Zane, Slash, Gavin Rossdale, Hans Zimmer, Eric Idle, Cat Deely, Directors Tony Scott and Charles Shyer and the Chairmen of both Warner and Universal Music, Tom Whally and Doug Morris, rocked along to the 90-minute show which was kicked off mesmerizing version of “Sweet Dreams” anchored by the haunting strings of the 30-piece Rock Fabulous Orchestra.  The set also featured mind blowing versions of other Eurythmics hits including “Here Comes the Rain Again,”  “Love is a Stranger” and a show-stopping version of “Would I Lie To You?”

A police escort of motorcade accompanied Stewart and dozens of gorgeous women donning “Rock Fabulous” attire to a special red carpet outside the show. The concert premiered designs from Audigier and Stewart in support of their “Rock Fabulous” collection looking to hit major retailers early next year.  “Rock Fabulous” is a creative collaboration that will embody Dave’s rock and roll lifestyle and his passion for music with Christian’s explosive ability to engineer globally distributed brands. Together they will re-define the rock and roll lifestyle through their common love for music and fashion.

The Roxy performance capped a remarkable week for Stewart who gave electrifying performances on the nationally syndicated talk show The View and Good Morning America.  Also this week, Dave Stewart’s anthem, “American Prayer,” has been included on Yes We Can: Voices of a Grassroots Movement, currently available at www.BarackObama.com, and featuring performances by Stevie Wonder, John Mayer, John Legend, Jackson Browne, Sheryl Crow, and Jill Scott.  Stewart’s song and accompanying video are available at www.MyAmericanPrayer.com.  MyAmericanPrayer.com receives more than 5,000 unique visitors every day since its launch on August 22nd.

Stewart recently released Dave Stewart Songbook, Vol. 1, an album consisting of new versions of his most celebrated material backed by a full orchestra. The CD features 21 songs written by Stewart that were made
famous by the likes of Eurythmics, Bon Jovi, Celine Dion, Tom Petty, Mick Jagger and many others. The new album accompanied by a hard-cover, 330 page glossy book of the same title that includes a chapter dedicated to each song with the story behind the music and stunning photos of his collaborators during the recording sessions, most of which were taken by Stewart himself and are now exhibited in The Morrison Bowery Gallery NYC.

Stewart is described by Bob Dylan as “a fearless innovator” and he has built up a repertoire of remarkable songs that have been performed by some of the most influential musicians of our time.  In 1999, Dave Stewart along with his Eurythmics partner, Annie Lennox, were honored with the Lifetime Achievement Award at the Brit Awards after having sold over 75 million albums.

Stewart is also known as one of the most prestigious British record producers, working with the biggest names in the music industry worldwide. He has won Best Producer at the Brit Awards four times, as well as numerous Grammy’s, MTV Awards and British Songwriter awards.

Mick Jagger and songwriter-producer Dave Stewart, better known as the other half of Eurythmics, are "collaborating," Stewart’s rep confirms to EW.com. The two were spotted leaving a Los Angeles studio days after Stewart played a gig, backed by a 30-piece orchestra, at the Sunset Strip hotspot The Roxy on September 24. Details of the project have yet to be announced, but the recording sessions cap off what’s already been a busy fall for Stewart. In the last month, he has made the morning talk show rounds, hosted an exhibition of his photos at New York’s Morrison Hotel Gallery, and entertained celebrity fans at shows on both coasts (Jon Bon Jovi, Andy Garcia, Deepak Chopra and Gavin Rossdale were among the famous faces in the crowds).

Some recent press – Billboard, The Guardian…

Having already inspired several songs, Barack Obama’s historic presidential campaign has now spawned an entire CD. Hidden Beach Recordings has compiled a collection of current, classic and new tracks for "Yes We Can: Voices of a Grassroots Movement."…

… Integrating speech excerpts from nominee Obama, the CD features such current and classic material as Mayer’s "Waiting on the World to Change," Crow’s "Out of Our Heads" and Wonder’s "Signed, Sealed, Delivered I’m Yours," which is the official Obama-Biden campaign anthem. New music on the CD includes Lionel Richie’s "Eternity," John Legend’s "Pride in the Name of Love," Dave Stewart’s "American Prayer" and Malik Yusef’s "Promised Land" featuring West and Maroon 5’s Adam Levine…

Stevie Wonder, Kanye West and Sheryl Crow will all contribute to Yes We Can, an ode to change and new tomorrows. What’s the betting it won’t feature on John McCain’s iPod? Barack Obama and Stevie Wonder … Can they kick it? Yes We Can…

…Although musicians like Will.I.Am, Dave Stewart and Ludacris have already created star-studded pro-Obama tracks, none of these were requested – or officially sanctioned – releases. Luda, Dave and the Black Eyed Pea have been left off Yes We Can, but the compilation does include tracks by John Mayer, Sheryl Crow, John Legend, and a new song by Malik Yusef featuring both Kanye West and Adam Levine.

The Californian gal soaked up the UK’s rich musical heritage before making her debut album.

"The UK takes music to the next level.

“Freddie Mercury from Queen was – and remains – my biggest  influence.

“The combination of his sarcastic approach to writing lyrics and his ‘I don’t give a f***’ attitude really inspired my music.”

Female pop stars are dominating charts all over the world and Katy, 23, reckons it is all down to feisty British girls.

She said: “I think there’s a healthy dose of oestrogen in the world today.

“Amy Winehouse and Lily Allen have definitely helped with that. They have introduced America to great music.”

Katy recorded much of her album One Of The Boys in Surrey with Eurythmics star Dave Stewart, 56.

She revealed: “We both have crazy minds. I love being around him because he always has an idea on the go and so many stories. I shut up in his presence.”

And 39-year-old Cathy Dennis, the woman behind Kylie Minogue’s monumental Can’t Get You Out Of My Head. was another major influence – on her tastebuds at least.

Katy explained: “Cathy introduced me to PG Tips tea and now I’m addicted. I drink it all day long.”

Despite her love of all things British, Katy has ruled out working with pal Mika, 25.

She added: “I love Mika but it would be too much if we hooked up. It would become a circus.”

One Of The Boys is out now.