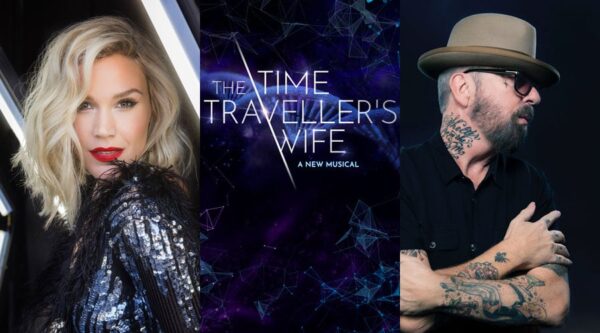 THE TIME TRAVELLER’S WIFE: THE MUSICAL WITH MUSIC & LYRICS BY JOSS STONE & DAVE STEWART & BOOK BY LAUREN GUNDERSON PREMIERES TODAY AT STORYHOUSE, CHESTER FROM 30 SEPTEMBER 2022 FOR TWO-WEEK SEASON AHEAD OF WEST END TRANSFER.

The Time Traveller’s Wife: The Musical, based on the best-selling novel by Audrey Niffenegger and the New Line Cinema film screenplay by Bruce Joel Rubin, is premiering today at Storyhouse in Chester from 30 September to 15 October 2022. The two-week season will precede a West End transfer, to be announced at a later date. The Box Office for the Storyhouse members is now open and it will open to non-members from 12 noon on 21 February.

With a book by Lauren Gunderson, original music and lyrics by Joss Stone and Dave Stewart and additional lyrics by Kait Kerrigan, the production will be directed by Bill Buckhurst and designed by Anna Fleischle, with choreography by Shelley Maxwell, lighting design by Lucy Carter, illusions by Chris Fisher, video design by Andrjez Goulding, sound design by Richard Brooker, musical supervision & arrangement by Nick Finlow and orchestrations by Bryan Crook. Casting will be by Stuart Burt CDG. It will be produced by Colin Ingram for InTheatre Productions, Gavin Kalin Productions, Teresa Tsai and Crossroads Live, by special arrangement with Warner Bros. Theatre Ventures.

The Time Traveller’s Wife: The Musical weaves a heart-breaking and soaring original musical score by multi Grammy Award-winning composers Joss Stone and Dave Stewart with one of the most beloved novels of the last 50 years.

Producer Colin Ingram said, “I am so delighted to be bringing this incredible new musical to the 750-seat Chester Storyhouse for a two-week run prior to a transfer to the West End and beyond. We are excited to come to this fantastic new theatre, which has an incredible ethos of accessibility and nurture lead by CEO Andrew Bentley, and to show the people of Chester and the North West this exciting, thrilling and beautiful new musical which Joss Stone and Dave Stewart have written stunning new songs for. For those who have not been to the Storyhouse, this premiere is the time to come and enjoy a fantastic musical in a fantastic venue with a great atmosphere and facilities.”

Dave Stewart and Joss Stone said of working together on the new musical, “We have been on many crazy adventures together but we’ve never ‘Time Travelled’ till meeting Lauren Gunderson. Writing these songs together whilst being in different locations on different time zones has been a trip (literally), throwing us into an eddy of emotive melodies and heart-wrenching lyrics to go with the push and pull of this unusual love story. We all time travel in our relationships and in our lives in general, but to write something that people will see and hear happening live on stage is thrilling to imagine, and hearing Bill Buckhurst’s interpretations of Lauren’s script for stage as we went along has been so inspiring.”