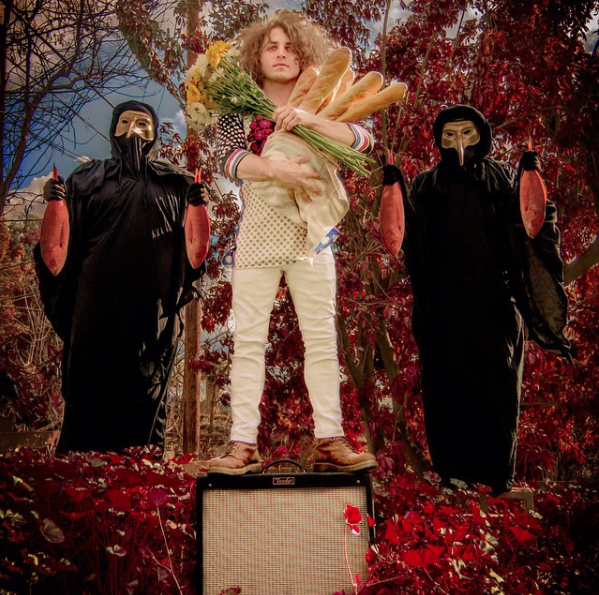 The Burning of Rome began modestly as Adam Traub’s recording project in a laundry room in Oceanside, CA. It rapidly outgrew the four-track tape recorder on which it was born and demanded his complete devotion, as well as some talented extra musical hands, to bring it to life. Enter the Romans: Oft barefoot axe wielder Joe Aguilar, whose specialties include scratchy guitar licks and spastic dancing. French bass man Keveen Baudouin, whose metronomic mind produces calculated bass lines with intelligence and fury. Slacker-era siren Aimee Jacobs who belts with operatic force while hammering on her glockenspiel and synthesizers. Zen guru Danny King, shredder behind the kit, who is, quite obviously, the terrestrial answer to the octopus. And Traub, manipulator of keyboard, guitar, light system—the proverbial kitchen sink through an amplifier—all while demonstrating a vocal gradation as yet undocumented elsewhere in nature. Mix this all together and you have space rockers The Burning of Rome blasting their phonic waves at unsuspecting humanoids in Southern California for the past few years. The quintet has conjured a sonic palate replete with everything from death pop bliss, galactic rock, punk, to indie spaghetti western, and have now harkened the masses with the release of their latest album Year of The Ox. “We have assimilated,” Traub says of the unit. “We share an unbridled passion to revere music as life rather than hobby.” The Burning of Rome was welcomed into the sun-kissed arms of San Diego’s independent Surfdog Records who released the group’s strange and sprawling debut With Us in 2012. A regional favorite, which the San Diego Reader described as sounding as “if the Misfits took psychedelics and performed an ABBA tribute,” With Us won the title of “Album of the Year” from the San Diego Music Awards. Surfdog introduced the band to famed Butthole Surfer and producer Paul Leary (U2, Melvins, Sublime and Meat Puppets), who fell in love with the band, leading him to captain the production duties for Year Of The Ox, alongside co-producer Traub. The brunt of the thirteen-song collection was tracked at the El Paso, TX pecan orchard and auditory oasis known as Sonic Ranch, which Traub calls a “veritable museum of rock and roll artifacts with some of the rarest recording gear on the planet.” The rest of the album was completed back in Leary’s hometown of Austin, where several guest drummers—Josh Freese (A Perfect Circle/NIN), Dale Crover (Melvins/Nirvana) and Matt Chamberlain (Pearl Jam/Of Montreal) dropped by to beat sticks and blow minds. Year of the Ox weaves the three concepts of art, rebellion and life into a cascading aural braid. Each song, disguised by infectious pop hooks and provocative allusions to historical lore, elicits an intensely moving account of Traub’s interpretation of the human experience. (RIYL: Mr. Bungle as heard through whatever space-fangled stereo system is installed in the Starship Enterprise’s holodeck.) The Burning of Rome’s live show is a different beast entirely. It fuses the brashness of punk with the orchestrated drama of a theatrical production, personified by front man Traub stomping carelessly on a crooked timeline between GG Allin and David Bowie. The group is oft (and rightly) regaled as one of the best live bands in Southern California, much to the chagrin of band members’ body parts which are regularly sacrificed to serve their mechanical purposes as mere extensions of their instruments. “It’s inherent,” Traub says. “Our blood beats to perform, travel and create. And damn the torpedoes, we’ll continue to do so as long as this world’s still spinning.” 2013 was a year in motion for the Burning of Rome—opening for the Yeah Yeah Yeahs at Milwaukee’s Summerfest, a string of east coast dates with alt-supergroup Volto!, tracing the Pacific coast with the iconic Psychedelic Furs, and a jaunt across the pond for an acoustic tour of London. Similarly, 2014 has gone supernova for The Burning of Rome, with a feature on the Carson Daly show, Mexican tour—including the Mexico City Vive Latino Festival alongside NIN and Arcade Fire, main support support for The Dirty Heads eastern US tour, and a brilliant new album (best alternative album at 2014 San Diego Music Awards). Whether the Burning of Rome leaves you mesmerized, bloodied, confused, ecstatic or bewildered, or whether you can’t figure out if you’re witnessing a punk show, carnival, dance party or performance art piece, one thing is certain—the Year of the Ox is upon us.